October 19, 2019
Odisha has always become mystical and mysterious about its offering to global travellers. The state has been the custodian of more than 2000 years of cultural & historical legacy which people are yet to explore. The marvellous discovery of the Buddhist establishments of Ratnagiri, Udayagiri & Lalitgiri by Archaelogical Survey of India (ASI), abandoned around 1000 years during the fall of Buddhism in India, is reframing the colourful glory of the grandeur of Kalingan architecture.

By visiting Odisha, one can pay homage to the ancient land of Kalinga which put all its resources and the entire maritime trade route to propagate Buddhism across the world. Though Lord Buddha spent his life in Nepal, Bihar and U.P., but without contribution of Odisha, the influence of Buddhism would have limited to Northern India. Buddhism became a world religion only after Kalinga-Asoka war and because of the vast maritime trade route of Kalinga. And all these happened only after 200 years of the Maparinirvana of Lord Buddha at Kushinagar. The great Kalinga war fought for the control over the trade route and its horrific consequences when millions sacrificed lives in defence of their motherland, changed  Chandasoka to Dhammasoka and he renounced violence. Hence, under patronage of Emperor Asoka, the maritime trade route of ancient Odisha was instrumental in propagation of Buddhism worldwide. 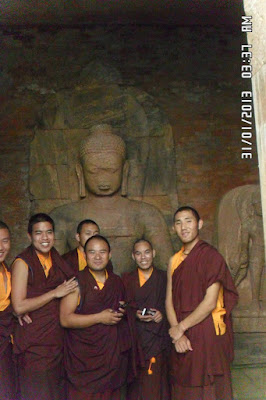 But association of Buddhism with Kalinga started during the life of Lord Buddha as his  first disciples, Tapusa and Bhallika, were honey traders from Ukkala (Odisha had several names in the past- Kalinga, Odra & Ukkala). Buddhism continued to be the religion of Odisha till 12th century A.D. Two hundred years of Bhaumakara rule, from 8th to the 10th century AD, are considered as the golden epoch of Buddhism in Odisha when Tantric Buddhism with its offshoots of Vajrayana, Kalachakrayana and Sahajayana involving all sorts of esoteric practices dominated the religious life of people of Odisha. In the 8th century AD, Subhakara Simha, a prince of the Bhaumakara family of Odisha, accepted Buddhism  and went to China where he met Emperor Xuan Zung of the Tang dynasty and introduced esoteric Buddhism. In the Buddhist Jataka stories of the fourth and third centuries B.C., a kingdom of Kalinga is mentioned with Dantapura as its capital. From Dantapura, the most venerated relic of Buddhism, Buddha’s tooth, was brought to Sri Lanka. This tradition forms the basis of a lasting relationship between Kalinga and Sri Lanka. Recent archaeological explorations have reported more than 340 Buddhist sites of which nineteen sites have been excavated so far.

Famous Chinese pilgrim Huien Tsang, who visited Odisha in 639 CE, found more than hundred Buddhist monasteries which he elaborately mentioned in his travelogue Sie-yu-kie. Prominent  among them were the remnant of monasteries of Theravada Buddhism in Langudi hills and of Mahayana & Vajrayana  Buddhism at Ratnagiri, Udayagiri and Lalitgiri  which was recently excavated, restored and conserved by ASI for public view . 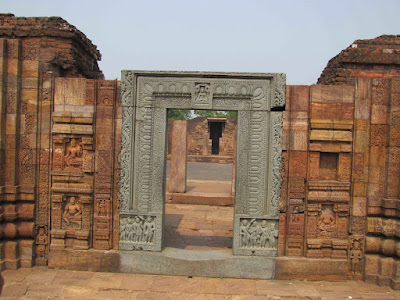 Here, one could observe the evolution of Buddhism from the Theravada sect with its austere and plain worship of a stupa to the growth of Mahayana and Vajrayana (tantric) sects with their elaborate pantheon of Bodhisattvas and other deities.  Also the site of Dhauligiri in Bhubaneswar, is a major tourist attraction because of the modern Shanti Stupa (or Peace Pagoda) constructed by Kalinga Nippon Buddha Sangha in 1972 in commemoration of the Kalinga war. Dhauligiri is also famous for the Rock Edict of Asoka (or Kalinga Edicts). Other important Buddhist sites located near the Langudi hillock at Dharamsala block of Jajpur dictrict  are Vajragiri, Radhanagar, Kayama, Tarapur and Deuli. 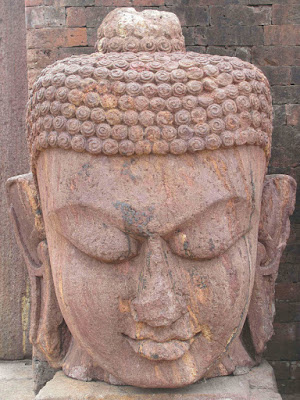 The Buddhist monastic establishment at Ratnagiri dated  from 5th century to 13th century AD became one of the last shelters of Buddhism in the country when the religion declined in other parts of India. The finest relic of Buddhist art at Ratnagiri is a magnificent doorjamb adorning Monastery 1 which represents the highest watermark of decorative art of India. Numerous references to the site in Tibetan literature suggest that Ratnagiri was an important center in the development of the Kalachakratantra in the 10th century CE, an assertion supported by the discovery of a number of votive  stupas, plaques, and other artifacts featuring Kalachakra imagery. As per Taranatha’s History of Buddhism, Ratnagiri housed 3 copies each of the scriptural work of Mahayana and Hinayana (Theravada) Buddhism. Five hundred monks (from all over India & abroad) were resident here.


Udayagiri or the “Sun rise Hill”, the most picturesque among the three is situated on the slope of a crescent shaped low hill. This site, a Mahayana-Vajrayana site was a vibrant center of  Buddhist learning and worship between 8th to 13th centuries AD. Here, the Mahastupa of a total height of 7m from the ground and 4.8m from pradakshinapatha  has niches in each cardinal direction which enshrines seated images of Dhyan Buddhas-Akshobhya (E), Amitabha (W), Amoghasiddhi (N) and Ratnasambhava (S); all  inscribed with Buddhist creeds. 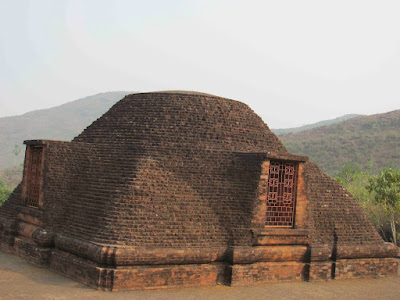 Lalitgiri is one of the oldest Buddhist establishment in the world as the iconographic analysis indicates that this site had already been established during the Sunga period of the 2nd century BC. The hilltop Mahastupa at Lalitgiri is 15 meter in diameter, and is constructed in Sanchi style which is visible from afar. 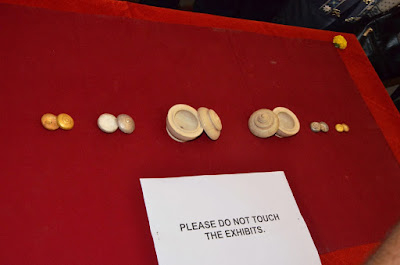 The excavation of Lalitgiri site led to the finding of sacred buddhist relic casket which contained relic or dhatu in the form of a small fragment of bone which is claimed to be of Lord Buddha. The relic casket is now at ASI office in Bhubaneswar. Odisha tourism is planning to erect a permanent structure at Lalitgiri for veneration of Buddhist relic by pilgrims.Another attraction at the site is the structural remains of a large brick built apsidal chaityagriha. 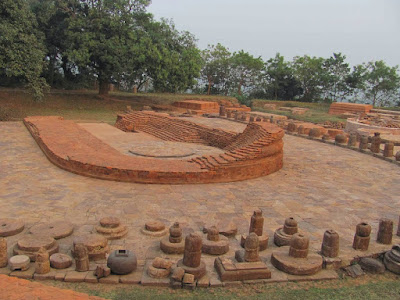 All the major sites of Buddhist circuit in Odisha fall within 100 kms from Bhubaneswar airport which takes around one & half hours to reach through well maintained roads.  The accommodation and hospitality infrastructure at the heritage sites are now provided by Gurgaon based Toshali Resorts International which is now managing three properties at the Diamond triangle all equipped with all modern amenities and convention facilities. 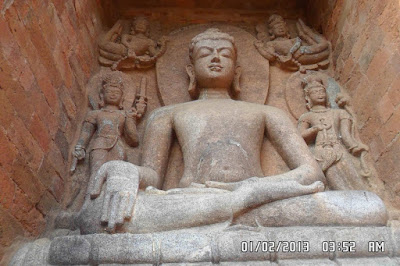 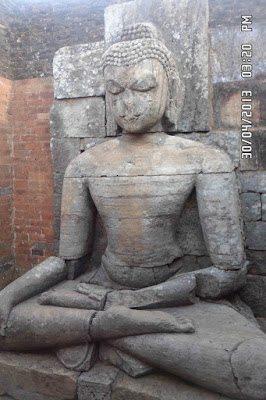 Based on the travelogue of Chinese pilgrim Hiuen Tsang  which informs us that emperor Asoka built ten stupas in Odra desa at places where Buddha visited and he had seen  such stupa near the capital of Kalinga, we can infer that Lord Buddha might have visited Odisha on invitation of his first disciples Tapussa & Bhallika for preaching keeping in view the long life span of Tathagata.  At present,  although archaeologists and historians might be unable to justify visit of Lord Buddha to Odisha, but as I mentioned at the beginning that Odisha holds numerous mystery in the womb of mother earth. So, there exists plethora of opportunities for the upcoming scholars to explore the treasure of an ancient civilization whose prosperity had influenced several countries like Sri Lanka, Indonesia, Malaysia, Philippines, China etc where millions of people still claim that their ancestral root is in the land of Kalinga in India, which is none other than Odisha. Hence, a visit to the land of ancient Kalinga known for its rich cultural legacy is a must for all those who want to connect to their roots and pay homage to  the place for which Buddhism is known across the world and is today the fastest growing religion.

(The author Sameer Kumar Das is the Co-founder and Secretary of Kalinga Lanka Foundation who works at New Delhi as a Marketing and Communication Consultant. The article was published in TravelBiz Monitor, a leading Indian travel website & publication which can be viewed with the weblink
http://www.travelbizmonitor.com/mystical-odishas-buddha-trail-sameer-kumar-das-22995)

Popular posts from this blog 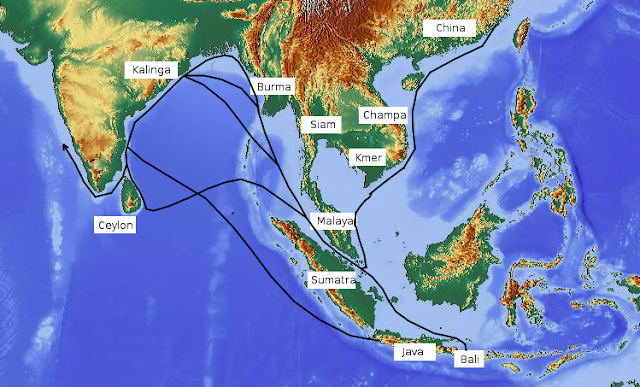 “The entire two-way trade route of 14,000 kms from the mouth of Mahanadi to  Bali  and back used to be completed by Kalinga Sadhabapuas in about 180 days (during mid-November to mid-May). The ships used to sail at a speed of 4.86 k.p.h. The seaworthy sailing period was 120 days while the rest 60 days were spent on trading and rest.” The Kalinga  Sadhabapuas  voyaged to  Bali  in the sea-worthy country boats and used to take advantage of the North East monsoons, which normally starts from November. By taking advantages of this retreating monsoon (North East Monsoon) the boats used to sail from Mahanadi mouth down to the South West along the East Coast of India right up to Nagappattinam in the Cauvery Delta and Point Calimere 10 degree 20’N latitude further south, just north of  Palk Strait . The Kalinga sailors used to trade all along their South West ward voyage along the East Coast of India and used to replenish the essential provision like food and water, if required. Thus, th
Read more 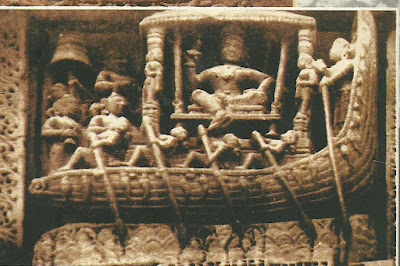 Situated on the shore of the Bay of Bengal, ancient Kalinga once comprised the coastal regions of modern Odisha and the adjacent coastal districts of Andhra Pradesh and Bengal as well. Owing to its location between the two great East Indian deltaic regions of the Ganges and the Krishna and Godavari rivers, Kalinga itself had two distinct historical core areas in the delta regions of the Mahanadi in the Central Odisha and, further to the Southwest, of the Rishikulya and Vamsadhara rivers in Southern Odisha and Northwestern Andhra Pradesh. The earliest historically known centre of Kalinga was at Toshali and Kalinganagara (Sisupalgarh) near Bhubaneswar, the respective capitals of Ashoka and Kharavela in the third and first centuries B.C.   It was most likely this central Odishan core area under Kharavela’s successors to which the Roman geographer Pliny referred in the first century A.D. Pliny writes: “The royal city of Calingae is Parthalis (Toshali). Over their kingdom 60,000 foot
Read more 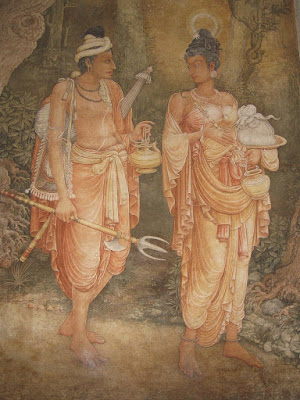 Few years ago, one of the senior diplomat of Sri Lanka High Commission in New Delhi, a close friend of mine, visited Odisha for first time with his family.  He was awe-struck with what he experienced there. After returning he told me, “I am surprised to see a place in India which reminds my homeland Sri Lanka, so much of resemblance in food, climate, culture, physical appearance and many more.” He was true, there indeed exist a similarity in Odisha and Sri Lanka which we need to explore. The reason for the diplomat’s unique experience is the economic, spiritual, cultural and marital linkages between ancient Kalinga ( i.e. present day Odisha and parts of Andhra & West Bengal) and Sri Lanka which blossomed for more than 2000 years. The relationship tapered off around the 17th century A.D. due to political developments and the advent of foreign rulers in both the countries. The ancient Ceylonese religious scriptures, the Mahavamsa, Dipavamsa, Dathavamsa and others, have detaile
Read more